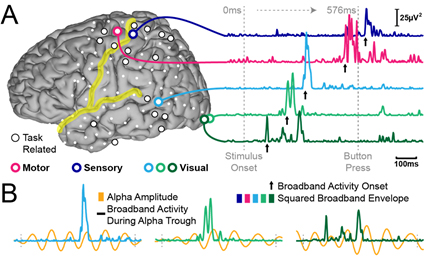 Many neurological disorders and diseases depend on an accurate assessment of brain function using an electroencephalogram (EEG).  Scientists at the National Center for Adaptive Neurotechnologies have developed a new method for measuring cortical excitability.  Initial studies of the method have shown a 65% increase in accuracy thereby addressing some of the limitations of scalp-recorded EEG recordings and improving results of EEG applications.  Current methods to provide this assessment typically make measurements of the power or phase of oscillatory EEG activity.  In substantial contrast, the principal measurement used in our model is based on instantaneous voltage amplitude of biased oscillations.  We recently showed that this measurement is a better predictor of cortical excitability than the traditional measurements of power or phase.

The two most influential theories that attempt to explain these rapid variations in behavior take advantage of measurements of oscillatory power and oscillatory phase.  The first hypothesis is communication-through coherence (CTC) whereby the brain attempts to optimize information transfer by synchronizing the timing of oscillatory activity at the sending and receiving sites i.e. neuronal firing occurs preferentially at the trough.  In contrast, the second uses a gating-by-inhibition (GBI) hypothesis that suggests neuronal populations that are not related to the task are functionally inhibited by increased oscillatory power in specific frequency bands.

We developed a unifying theory, called function-through-biased oscillations (FBO) hypothesis, that synthesizes the CTC and GBI theories.  One of its core concepts is that the instantaneous voltage of biased oscillations, rather than oscillatory power or phase, is the most immediate and most accurate index of cortical excitability.  Thus, calculating this new index from EEG signals provides a way to improve estimates of brain function or behavior.  Importantly, this new calculation method does not require different types of sensors or other changes in experimental or clinical setups.

HRI is seeking commercial partners to license this method for use in EEG and ECoG recording devices in neuroscience diagnostics and therapeutic applications.